This tutorial demonstrates some fundamental concepts of event driven particles and tyFlow:

> Note that while understanding the logic of this example is relatively easy, tweaking all the parameters to get it right takes a lot of tests and fine tuning.
Download the example file and playing with the system parameters to get to know how the different operators affect the particles.

Explanation of the flow graph:

> To create a tyFlow particle system:
In Command Panel > Create > Standard Primitives,
Click tyFlow, and then click and drag in the viewport to create a tyFlow object.
When the tyFlow object is selected, in the Modify panel press the Open Editor button to open the tyFlow editor. Drag operators from the library below to the work space in order to create a new event containing them, or drag them into existing events.

> Note that almost all of the system’s events contain a Display operator set to Geometry mode so that the particle’s actual animated shapes will be displayed in the viewport, and also a Mesh operator needed for particles to be exported to a render engine for final rendering.

System setup with the tyWind objects responsible for moving the particles in the non-physical events of the system, and a Point helper object that serves as a ‘find target’ for the particles to get back to the initial location above the slide:

Particle shapes for the ‘Rocket Upward’, ‘Chopper back to start’ and ‘find drop location’ events.
Note that the shape pivots are consistently at the center of the ball for the shape switching to work well, and that the ‘chopper’ animation is done at the mesh level using Poly Select and XForm:

By default UE4 uses fast simplified convex collision shapes to calculate collision for static mesh actors.
This means that the player or projectiles wont be able to path through holes, openings or doors in the model.

To set complex (concave) collision for a static mesh model:

In Static Mesh editing window, in the details pane, under Collision:
Set Collision Complexity to: Use Complex Collision As Simple

This example shows the default behavior for a model that has an opening, neither the projectiles nor the player can pass:

In this example collision for the model was set to Use Complex Collision As Simple:

When you want to bake an object’s rigid body physics simulation to regular Keyframes:

What we refer to in CG by the term “Fresnel Effect” or “Fresnel Reflections”, is the way Specular Reflection intensity changes according to light \ surface incident angle, and it is a basic optical property surfaces.

Specular reflection intensity changes according to light incident angle, and behaves almost like a perfect mirror at grazing view angle.
The reason we call this natural reflection behavior “Fresnel Effect” or “Fresnel Reflection” is that the equations describing the how reflection intensity changes according to incident angle were invented by the French Physicist Augustin-Jean Fresnel, and in early CG days, not all systems knew how to calculate natural reflections or reflections at all for that matter. So in CG we ended up treating this as something special, when in fact it’s not special in nature, it was just special in the early days of ray-tracing.

Examples of some physical IOR values*:
Air (vacuum): 1.0
Water: 1.33
Glass: 1.52
Diamond: 2.417
* Physical values differ between different measurements and samples of materials so you might see differences between different data sources. 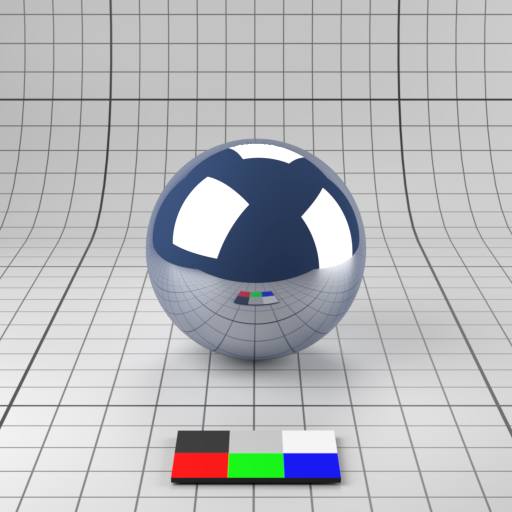 This ball is rendered without “Fresnel Reflections”.
Its Specular reflection is blended consistently at 50% over the diffuse color (reflection), not affected by the light/view incident angle.
The result looks wrong for a natural material. It may look like a dielectric material (non metal) that’s coated with a silvery coating, but it can’t look correctly like glossy plastic or glass.

This ball is rendered with “Fresnel Reflections”.
The reflections look natural for a dielectric material (non metal), because they are dim at perpendicular incident angle and intense at grazing view angle, hence seen mostly at the sides of the ball accentuating its contour.

Theoretically Specular Reflection for all types of materials should be calculated using what we refer to in CG by the term “Complex Fresnel”, that is reflection equations that take into account both the Refractive Index (IOR) and Extinction Coefficient for 3 primary colors (spectrum wave lengths).
*Complex fresnel component values for different materials can be found on https://refractiveindex.info/.
In practice, for Dielectric materials (non metals), most common production rendering systems use what we refer to in CG by the term “Simple Fresnel” or “Simple IOR”, that is calculating the reflection for all 3 primary colors using a single Refractive Index value, which is the Refractive index of the Green primary color.
This method has proven itself to be very efficient for rendering non-metallic surfaces (dielectric materials).
Rendering metallic reflection using complex IOR produces the most realistic color and reflection* for metals.
*In metallic surfaces the color is the reflection color itself and not a separate Diffuse component.
Some rendering systems like Arnold 5 for example have implemented a general form* of Complex IOR into their physical surface shader, Complex IOR reflection can also be rendered via OSL shaders that can be found on the web (or written..).
*I’m using the term ‘general form’ because these implementations don’t include input for Complex IOR values but just a general metallic reflection curve, that interpolates manual color selection.
Popular useful cheats for mimicking metallic reflection without complex IOR are to set a very high (non physical) simple IOR value, like 15 to 30 which forces the Fresnel reflection to become more metal-like, or turn Fresnel reflection completely off, turning the specular reflection into a perfect mirror reflection, or create a custom reflection/angle curve/ramp that produces the effect of the metallic reflection color and intensity changing by incident angle, see example here.

In many popular production renderers, the physical surface shader uses a single IOR parameter. Some rendering systems allow using 2 different IOR parameters, one for calculating reflections and the other for calculating Refraction.
* physically correct dielectric materials should be defined with the same IOR value for both reflections and refraction. using different IOR values for reflection and refraction allows useful cheats like creating transparent a material that is modeled without any thickness or defining a transparent glass that has silver reflective coating like sunglasses sometimes have.